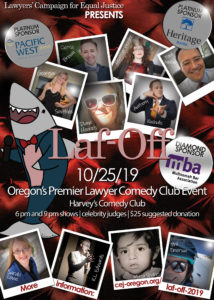 Nine lawyer comedians vied for fabulously decorated rubber chicken awards. With such talented comedians, we wish that everyone could have taken home a chicken, but these were the ultimate winners:

Thanks to everyone who came out to the shows, who sponsored (Multnomah Bar Association, Heritage Bank, and Pacific West Bank), and who donated to assist CEJ’s statewide support of legal aid. We couldn’t do it without you!